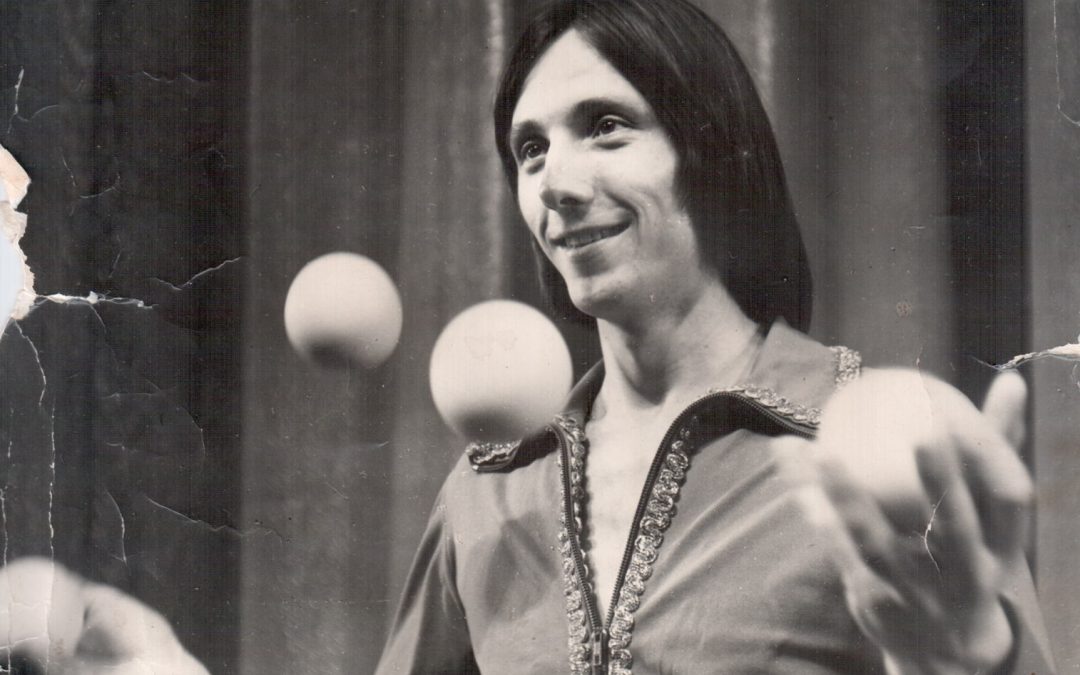 Mikhail (Michael) Kuzmich Rudenko (rus.: Михаил Кузмич Руденко) is the Ukrainian juggler who invented the semi-filled juggling stage balls that became known as Russian balls. He is a great juggler, who when he was young, practiced very hard with no mercy on himself. He has been an inspiration to many other jugglers, but has never been acknowledged for his accomplishments. This article is an attempt to shine some light on an important juggler, whose name and invention deserves to be better known. With the help of several other jugglers (who are credited below in this article), I assembled some information about him and called him for an interview.

Mikhail Rudenko was born November 20, 1954 in Lubny, Poltavs’ka oblast, Ukraine, to the family of Kuzma Ivanovich Rudenko, an engineer of urban green landscape solutions, and Maria Ivanovna Rudenko, a ticket controller at the city bus company. His daughter, Alexandra Rudenko, (born November 2, 1994) used to juggle in a circus studio organized by her father from 2004 to 2011. When Rudenko was around 15 years old, he went to a children’s circus school in his town where he started juggling. Unfortunately, this school closed shortly after Rudenko enrolled, so he practiced alone until he joined a circus school in the neighboring city of Pryluky, where he learned under the tutelage of juggling teacher, Alexander Petrovich Gruzin. Gruzin later taught his most famous student, Victor Kee.

In 1971, Mikhail attended the Republican Studio of Variety and Circus Arts in Kiev (currently called the Circus Academy) with two years of education at that time. His teacher there was Alisa Aslanyan. In the same year, there was another juggling student named Yuriy Pozdnyakov. 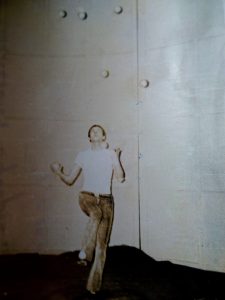 After graduation in 1973, Rudenko was working with Ukrconcert but was drafted into the army. Luckily he got into a military ensemble with Yuriy Pozdnyakov. They put together a juggling act and with this act they were even sent to participate in the 5th Contest of Variety Artists of the Soviet Union in Moscow in 1974, and they had good success.

After the army and until 1980, Rudenko worked with the concert company Kiev Music Hall which had 120 artists and was touring around the Soviet Union. He also performed in Czechoslovakia and Poland. It was not easy to go to another country in the Soviet times. Only privileged artists in the Head Circus Company in Moscow had this opportunity to perform in the west. To get into this circus company artists must have had very high level skills and a little bit of luck. Rudenko wanted to get into this company, so they invited him to show his act in front of the creative team at their headquarters. Heading this creative team was Alexander Kiss, who liked Rudenko very much and was on his side. Kiss recommended Rudenko, but they could offer him only a small salary as a rookie. Rudenko asked for a higher salary and when the company declined, Rudenko didn’t take their offer.

During his work with Kiev Music Hall, Rudenko took his skills to a very high level. In 1978 he was at the top of his abilities. He put 10 ball multiplex juggling in his act and was practicing 12 balls multiplex. His goal was 14 balls, but in the same year he got very sick, developing an infection in his liver which affected his future life. Rudenko was very obsessed with juggling, especially since he was so close to his goal that he just couldn’t stop practicing. This made his illness even worse and he was forced to retire in 1980.

In 1987, Rudenko taught juggling in the State Kiev Circus School and retired shortly thereafter because of health problems. His student was Anatoliy Klimentiev, who is teaching juggling now in Pryluky City in the children’s circus school Udai, which was rebuilt by Viktor Kee. Also Viktor Kee himself had Rudenko as his teacher on his last grade in the circus school in Kiev.

From 1990 to 2011 Rudenko organized a children’s circus school in his town and was teaching juggling there. But again his health was getting worse and he had no more strength to continue. Unfortunately, he is currently still not healthy and is dependent on his small pension.

At the beginning in the children’s circus school, Rudenko learned to juggle different tricks with 3 and 4 big balls within two years, as well as a 5 ball cascade and similar things with clubs. With rings he juggled 7 within the first couple of years and was able to juggle 8 rings in a sync pattern. 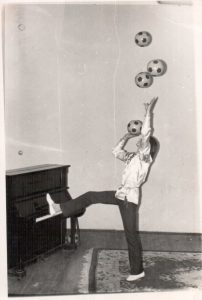 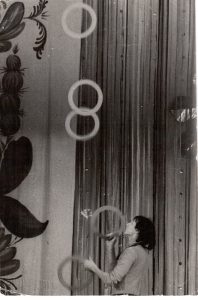 But when he enrolled in the Kiev Circus School, he narrowed down his focus to only balls and he juggled almost only with the small balls that he created himself.

Jugglers who know him say he was training very hard. Sometimes he trained 8 to 10 hours a day and only took breaks to drink milk and nothing more.

In his stage act with the balls, he performed tempo juggling with a lot of movement around the stage, which was a popular style at that time. He did some contact juggling with three balls on his chest. With five balls he ran around the stage with a lot of 180s and 360s (5-6 connected turns), backcrosses, and so on. With 6 balls, he juggled in a shower and shower multiplex while jumping in a circle. In his act he also did some tricks with 6 balls that we call today siteswaps, like 9555, for several rounds.

After 6 balls, he put 8 balls in one line and picked them one by one with his foot, kicking up each ball into the pattern until he had all of them and was juggling 8 balls in a multiplex pattern. Then he did different tricks and finished with 8 balls sync. He says the kick ups from the floor had been done by jugglers with the clubs before and he decided to do the same with balls.

In 1978 his final trick was 10 balls in multiplex pattern.

According to Rudenko, he did 7 balls for 1869 catches in training when he was 18 years old. He was practicing 10 balls starting in 1976 until he could run them for around one minute in practice. After that he put it in his act. In 1978 he started to practice with 12 balls multiplex and achieved a personal best of 16 catches (each catch with two balls). Note: he launched all 12 balls from his hands and used no special holster or anything. However, his goal was 14 balls and for that he used buttons on his pants and balls so that he could flash ten balls from his hands and then grab the 4 others connected to his pants and add them into pattern. Unfortunately it never happened because of his health issues. 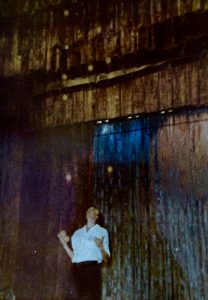 12 balls multiplex (one ball is out of the picture)

At the same time, Mikhail Rudenko and another great juggler, Vladimir Kuzmenko, were the first jugglers who did 10 balls multiplexes in their show in the USSR.

Rudenko regrets that he wasted his time and energy on juggling with other props. If he could start from the beginning again, he would practice differently, using only small balls using his own juggling system and with the help of an athletic coach.

In 2002 during the first «Juggling Day» in Russia Rudenko was honored with two prizes:
– «For commitment to a high ideals and personal contribution in developing circus art»
– «For development of Juggling as a genre. 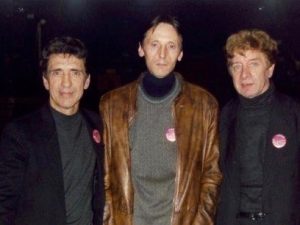 Many only knew the name Mikhail Rudenko as the inventor of Rudenko style balls – mistakenly called Russian balls. When I asked him if he is aware of what the common name for these balls is, he said no. When I told him, he laughed and asked me “why Russian if they were made in Ukraine?” I said that probably because Ukraine and Russia for the western people were kind of the same country. 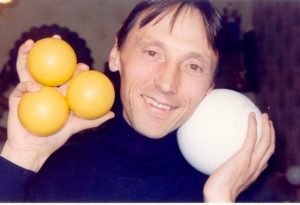 So what exactly did Rudenko invent? There was a factory in Pryluky City producing plastic toys and a kind of skittles games. So he took the balls from that game and filled them with sand. When he attended a circus school in Kiev, he took semolina instead of sand just because it was easier to fill the balls with. The plastic yellow balls from the Pryluky factory had a diameter of 80 mm and had a quite hard shell. Rudenko filled them partially with semolina to get 100 – 120 grams balls. He explained that previously there were smaller fully-filled balls and he his innovation was filling them just partly. When Alexander Kiss saw Rudenko’s creation he didn’t really like them and called them “Wobbly balls” but Rudenko was fine with his new juggling creation. These kind of balls got very popular in Ukraine, and most jugglers used semolina filling. Even the Kiev State Circus School was buying balls from the Pryluky factory for their student jugglers. The balls became really famous world-wide through Viktor Kee. Thanks to his creative modern juggling, many jugglers wanted to have the same juggling balls as him.

There is an extensive article written by Pavel Koshel about Rudenko’s juggling training system. That would be another extra article to write but in general it is about how to organize our training, how to develop other muscles apart from those that we use for juggling, and how to use athletics as a model to train endurance. “The athletes train their feet to be fast, we should train our hands to be fast.” He recommends having “aerobic juggling,” which means practicing basic tricks with 5 balls for about 45 – 60 minutes while paying attention to arm and body position, rather than only concentrating on the hardest tricks we can do. He also gives an example of the training week with a daily plan.

During the research process about M. Rudenko I got in touch with many jugglers to get some information. All of them remember him practicing very hard, and doing very impressive tricks. I would like to say thank you for help to the following people: